How Does Our Garden Grow?

Though the zucchini has been taking its sweet time. Everything else started sprouting about a week ago — the carrots, the various lettuces, the pumpkins. But the first zucchini seedling did not make its debut until late last week. I spotted the second one yesterday, and today there are two more.

However, because of the delinquency, I went ahead yesterday afternoon and planted several more seeds in a pot.

Lettuce in the garden patch 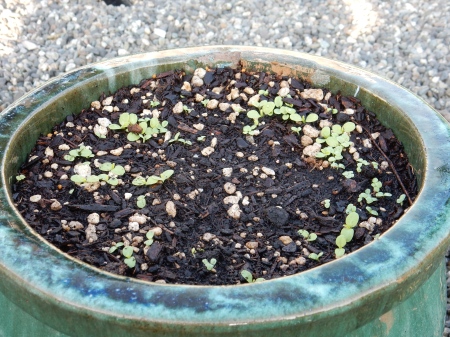 Lettuce in one of three pots

In my opinion, one can never have too much lettuce. In large part because we have such limited space for a vegetable garden, I blithely ignore the recommendations of the seed packets for how far apart to space the seeds. I figure, I’ll be picking it fairly often for dinner, so it doesn’t matter that they are closely spaced.

This entry was posted in in the garden and tagged carrots, lettuce, pumpkins, zucchini. Bookmark the permalink.